Rates are currently at a 2-year high, due to a number of factors – including the anticipation of higher inflation due to federal tax cuts which will increase consumer spending, as well as increased spending on infrastructure.  The Fed raises rates to cool the fire of inflation by tempering demand, making money more expensive.  That being said, rates are still at historic lows.  Back before the housing crisis, rates were inching above 6%.  When rates first dropped after the Fed began quantitative easing to lower rates in late 2008, people at that time began refinancing down to 4.875%, and rates today are still lower than that for most people.  That’s helping potential home buyers decide to jump off the fence move forward with a home purchase, and that is also why demand for housing is expected to remain strong this year.   You can read more here: 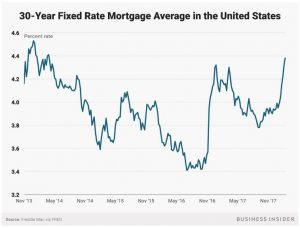 Important Reminders About The Mortgage Process

Important Reminders About The Mortgage Process